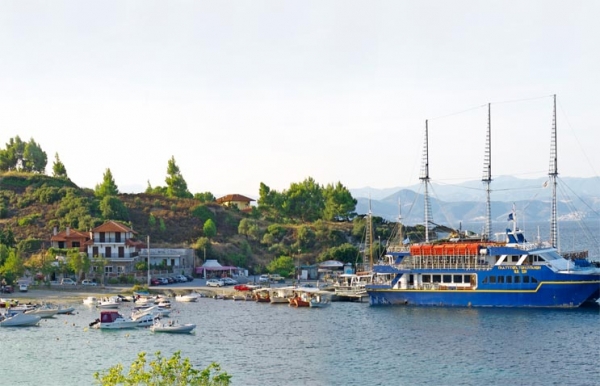 "GANGWAY FOR FISHING AND TOURIST BOATS"

In the cove of gulf Sigitikos, between the peninsula of Sithonia and Pyrgadikia lies Ormos Panagias. The area is truly beautiful and you may moor here and tour the surrounding sights, after having tasted the local specialties served in the small charming taverns. Boats sailing along the coasts of Holy Mt. Athos depart from Ormos Panagias on a daily basis. Ormos Panagias is the port of Agios Nikolaos and is located at a distance of 4 km. away from it. It has taken its name from the church of Panagia which was first erected in the Byzantine Era. The present day church was rebuild around 1970. The previous one was an edifice dating in the 19th century, but had itself been erected on the site of a preexisting one. A French battleship was sunk in the bay in 1854, the ship transported the supplies for the revolutionary corps of Tsamis Karatasios.

View the embedded image gallery online at:
https://halkidiki-holidays.gr/en/federation/members/sithonia/item/179-ormospanagias#sigProId5f87654844
More in this category: « Nikiti Ormylia-Psakoudia-Vatopedi »
back to top