The Monastery Dependency of Flogita dates back to 1311. Until 1924 it operated as a monastery dependency of the Russian monastery, later as annex of the American Red Cross which attended to the refugees of Kalamaria, while during the Nazi Occupation (1944) it was bombed by the Bulgarian conquerors. In the middle of the 1960s a major fire destroyed the building which was dilapidated. In 1999 the City Council of Moudania decided to grant the area to the 10th Ephorate for Byzantine Antiquities in order for the latter to undertake the necessary restoration works and for the building to be utilized as the Center for Byzantine Culture in Halkidiki, “Justinian”, as it was named by the team of archaeologists responsible for the works. The building will house the museum of the monastery dependency. The project is financed by the EU and national resources and its budget is 10 millions Euro.

Aristotle was born in Stageira in 384BC. His father was Nicomachus, personal physician to king Amyntas II of Macedon. His mother was Phaestis. His parents died when Aristotle was very young and Proxenos, a relative living in Atarnea, a city in Mysia, took him in his custody. When Aristotle turned 18, he left Stageira for Athens, where he studied in Plato’s Academy for 20 years, until, that is, the death of Plato in 347BC. Just prior to this Aristotle had founded a school at Assos in Troas, as a chapter of the Academy. It was then that he married Pythias from Atarneas. He stayed in Troas for three years and then crossed to the island of Lesvos, where he befriended Theophrastus, whom he later left as successor at the school of Athena. He stayed in Lesvos for two more years, namely until 343BC, when he was invited to Pella by king Philip II, to become the tutor to the king’s son, Alexander. Alexander’s education lasted for three years, until 340BC. Aristotle then retired to Stageira, where he married again, this time to Herpyllis, also from Stageira. He returned to Athens in 335BC and founded his own school, the Lyceum, later renamed to Peripatos. He directed this school for 12 years and it is in this interval that he composed all of his marvelous works. After the death of Alexander the Great, he was accused by his enemies for “irreverence” and took refuge in Halkida, where he had an estate, inheritance from his mother. It was in Halkida and at the age of 63 that he died, in 322BC. He was survived by his two children, Pythiada and Nicomachus. According to a posterior written tradition, a year after Aristotle’s death in Halkida, the people of Stageira officially moved and buried his remains in their city. It is reported that a majestic ceremony took place and a great shrine was founded at the philosopher’s tomb, while an annual festival, “Aristoteleia”, was established to honor the great man. There are present-day efforts for a revival of this great festival and the first artistic happenings took place in the summer of 1996 and were considered a great success.

The Cave Of Petralona

The Cave of Petralona is located roughly 1 km from the village Petralona. It opened to the public in 1979. Internationally renowned paleo-anthropologist Dr. Aris Poulianos discovered the first signs of the Archanthropus of Petralona, the oldest remains from our European ancestors, which date some 700,000 years back. The cave had became renowned for its paleontological and paleo-anthropological findings already by 1960, after the accidental discovery in it, by resident of Petralona Ch. Sarriyianidis, of the famous human skull. The value of that finding and its uniqueness spearheaded the undertaking of extensive works in and outside the cave. In 1968 and from 1974 until 1988 the excavations were directed by Aris Poulianos. In Poulianos’ papers on the cave he talks of bone and stone tools, but the nature of the publications does illustrate a clear picture thereof. The findings are surely very significant and constitute the first testimonies of the habitation of the Greek geographical space. From an anthropologic point of view, the fossil skull is a most significant finding, but there is discord regarding its date and, even worse, its evaluation. The principal views diverge significantly and they profess that the skull belonged to someone who lived 700,000 years in the past, according to some, of 200,000 years ago, according to others. 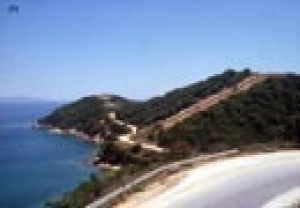 In Mythological Times Toroni was the wife of Proteus, son of Poseidon. There are traces of prehistoric settlements dating from the third millennium before Christ and many other relics of ancient, Early Christian and Byzantine monuments, which bear witness to the fact that the area is continuously inhabited since the Neolithic Age.

Ancient Toroni was founded by colonists from Chalkida in the 8th century BC. By the 5th century BC. Toroni was already one of the most important cities in Halkidiki. It had its own coin and was a member of the Delian League. Thucydides narrates that in 423BC Toroni was taken over by Spartan officer Brasidas. In 348BC the city was annexed to the state of Philip II of Macedon. In 168BC it was conquered by the Romans and the city fell into decline. In the Byzantine Era the area comprised of monastery dependencies, belonging to the monasteries on Holy Mt. Athos. Its mighty walls and other buildings were destroyed in the 19th century, when the Turks used the granite to pave central avenues in Constantinople and Thessaloniki. Findings from recent excavations confirmed the continuous habitation of the area since the end of the Neolithic Age up until the Ottoman Era. Architectural remains have been uncovered, however of a very fragmentary nature, since most were destroyed due to the continuous use of the space. The archaeologists placed particular emphasis on the cemetary of the settlement from the Iron Age, which is held to cover a period extending from late 2nd century until the middle of the 9th century. 134 tombs were uncovered in this cemetery, of which 118 contained ashes while 16 contained simple burials. 500 vessels also came to light, which were used either as urns or burial gifts.